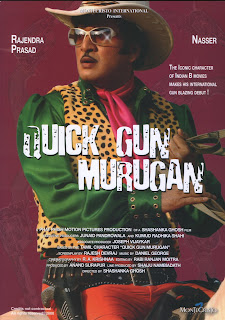 Telugu actor and comedy king Rajendra Prasad has completed an English film titled Quick Gun Murugan.Hollywood giant 20th Century Fox has bought the film and is set to distribute it.

Rajendra Prasad informs that the film will also be screened at a film festival in London this month. Speaking to reporters on Wednesday in Hyderabad, he said that he takes pride for being the only Telugu star to feature in an international English film.

“Quick Gun Murugan is shot in English but the central character is a Tamilian. It is shot both in English and Tamil. I play the character of a cowboy. It is a hilarious entertainer,” he revealed. He also informed that the film also promotes the importance of vegetarian food.

If you liked this Rajendra Prasad’s Quick Gun Murugan for London Film Festival, please like, tweet and share this on Facebook, Twitter, Google+, Pin Board or leave a comment. You can also get the latest News by subscribing to our feed. Don't forgot to share your voice with your friends! They may have also like or have thought on this News and that will help us to improve our selves!.

After the film 'Badri' with Pawan Kalyan, Puri Jagannath is contemplating to do again