You are here: Home / Actor / Nagarjuna’s king will shift to Bangalore places 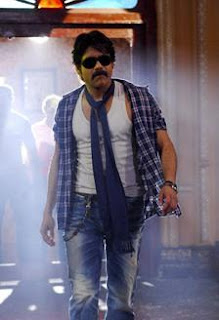 Nagarjuna’s new film ‘King’ in Sreenu Vytla’s direction is going at a steady pace. The next schedule of ‘King’ will be held at Goa for canning a song on Mamta Mohandas along with a stunt sequence. From Goa the unit will shift to Bangalore for a month long shooting at Bangalore Palace starting from October first week. Trisha will be joining the unit in this schedule along with other prominent casts.

The movie is being made with complete entertainment values and it’s understood that the script writers Kona Venkat and Gopi Mohan have put in lot of efforts to prepare the script that suits Nagarjuna’s image.

This flick is under Kamakshi Kala Movies banner and producing bySiva Prasad Reddy. As mentioned earlier the makers are planning to release the film on December 18.

If you liked this Nagarjuna’s king will shift to Bangalore places, please like, tweet and share this on Facebook, Twitter, Google+, Pin Board or leave a comment. You can also get the latest News by subscribing to our feed. Don't forgot to share your voice with your friends! They may have also like or have thought on this News and that will help us to improve our selves!.

On Friday (July 16), the title-look poster of Suriya’s Vaadi Vaasal was released. Directed by Vetrimaaran, the film is … END_OF_DOCUMENT_TOKEN_TO_BE_REPLACED

With the ongoing COVID-19 pandemic situation, international travel restrictions to and from India are constantly … END_OF_DOCUMENT_TOKEN_TO_BE_REPLACED

Janhvi Kapoor poses hot showing off her glossy thigh and other curves in her voluptuous body.  This beautiful and … END_OF_DOCUMENT_TOKEN_TO_BE_REPLACED