You are here: Home / Actress / Charmi as ‘Mantra Kanya’ 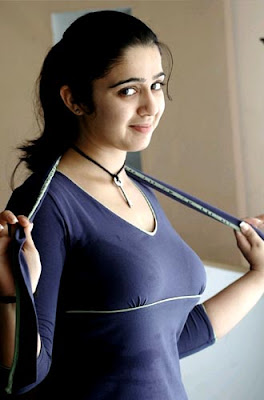 Charmi, who played in a heroine-centric film like ‘Anukokunda Oka Roju’, turned busy with the success of another lady-oriented film ‘Mantra’. After the film proved to be a big hit, several producers and directors queued up before Charmi’s house offering her roles in their films. However, Charmi has become very choosy and is cautiously selecting the characters.

Presently, she is playing heroine in ’16 days’. It is directed by Prabhu Solomon and produced by P Mahesh babu and D Y Choudary on the banner of Cosmos Entertainments. There were lots of expectations on the success of the film and the film unit sources say that the film would be a definite hit. Keeping her growing popularity in view, some producers are planning to cash in her image.

Venkata Reddy and Prakash are jointly dubbing a Malayalam film directed by Vinay into Telugu, where in Charmi played the heroine. It is learnt that ‘Mantra Kanya’ was the title confirmed for the movie. The producer is hopeful that the film would be a bigger hit than Charmi’s ‘Mantra’.

Simbhu Devan ready for his next