You are here: Home / Actor / Prabhas coming up with a new film titled raju 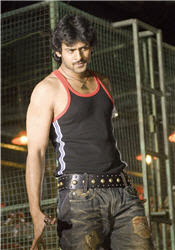 After bujjigadu, Prabhas coming up wtih a new film under Gopikrishna Movies banner of Krishnam Raju.Prabhas will be palying title role raju.Four heroines will be roped to play female leads opposite Prabhas. Krishnam raju will also paly a vital role.
The director and other details will be announced very soon.This film sets will be starting from August.

On the other hand, Prabhas will also do a film for Director Raja (son of editor Mohan). Trisha will be the heroine and Editor Mohan will produce the film.

If you liked this Prabhas coming up with a new film titled raju, please like, tweet and share this on Facebook, Twitter, Google+, Pin Board or leave a comment. You can also get the latest News by subscribing to our feed. Don't forgot to share your voice with your friends! They may have also like or have thought on this News and that will help us to improve our selves!.

Tamanna shaking her legs in Kathanayakudu

Tamanna shaking her legs in Kathanayakudu